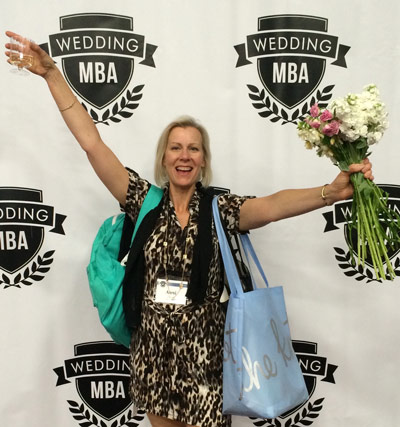 Hi! I’m Anni Manley, the manager/owner of Flinn Block Hall! I enjoy seeing all the special events here, and I’m especially fond of weddings. You won’t find a venue owner more enthusiastic about weddings than me! It’s a privilege to provide a wonderful facility for our clients, and I love watching how each of them transform this historic space. We primarily host weddings, but we’ve also hosted memorable 50th anniversary parties, vow renewals, holiday & birthday parties, celebrations-of-life, fundraisers, proms, dances, casino nights, and even a murder mystery party!

My co-owner and husband Marc and I originally started out in Westport, Connecticut. While using Martha Stewart’s Weddings book to plan our own wedding, on impulse I called her Westport office enquiring about work. I was hired on to help with a few final catering jobs before she transitioned into full-time media work — for example, I helped bake 11,000 cookies for holiday cookie gift baskets for Ralph Lauren! Baking work morphed into graphic design for Martha for several years, designing and publishing her newsletter until the 1990 launch of her now-familiar magazine Martha Stewart Living.

We left Connecticut in 2001, and moved here with our two boys, and purchased the Historic Flinn Block building in 2005. We’ve had the pleasure of transforming this beautiful landmark building to the gem it is now. Aside from running Flinn Block Hall, I enjoy beekeeping, cooking/gardening at home, enjoying family time, and riding horses when I can fit it into my schedule!

In 2006, one of our restoration helpers expressed an interest to get married in a recently-vacated open space in the building, which marked the start of Flinn Block Hall. We did some initial renovations to spruce it up for his wedding, and after we saw how nicely it turned out, decided to fully renovate, customize, and equip it to better accommodate special events, especially weddings. Over the course of several years we added an elevator for better guest entry and equipment delivery, opened up the front of the room to expose more beautiful antique brick and large picture windows, created our lovely dressing rooms, and added gracious touches to our front entryway, such as new woodwork and a sparkly chandelier.

Made with love by Abide Web Design